Given yesterday’s airing of grievances against the world in general, I thought it might be interesting to look at where the phrase “pet peeve” comes from.

As a phrase, “pet peeve” is fairly young, dating back to the early 1900’s. The components of the phrase go back further. I won’t go into the origin of “pet” because that is a pretty common word, referring here–ironically–to something of which a person is fond. The interesting part of the phrase is the word “peeve.”

“Peeve” is related to the older word “peevish,” which dates back to the late 14th century and means “perverse, capricious, or silly.” The word itself is of an uncertain origin, but could be from the Latin perversus, which spawned the words “perverse and reversed.” The idea is there that something peevish is backward from what is normal.

It isn’t a big leap to see how something that annoys us–a pet peeve–is a perversion of how we think things should be (like being annoyed if someone puts the fork on the right instead of the left of a plate), even if those things aren’t universally recognized as perverse (like corruption and human trafficking and such).

Bonus fact: If you want an easy way to remember where the silverware goes lest you annoy someone, remember that fork and left both have 4 letters, while spoon, knife, glass and right have 5 letters. And since it gets lonely by itself, put the napkin under the fork (even if it has 6 letters and doesn’t fit the pattern).

7 thoughts on “On the Origin of Pet Peeves” 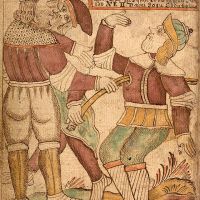