Normally, Labor Day Weekend brings about thoughts of family reunions, cookouts, and the beginning of school (not to mention the economic and social contributions of workers). But for the last few years, it has had very different associations for me. I think of long nights, early mornings, and typing until my fingers ache and my eyes dry out. You see, Labor Day Weekend is the official time-frame for the 3-Day Novel Contest.

It was shortly after the formation of the Weaklings, my writer’s group, that one of our members told us about the 3-Day Novel Contest.

“You write a novel in three days,” he said, as though that were something that could be done. Some of us had already been working on novels for three years at that point.

We looked up the information online. Sure enough. One novel, three days.

And so I outlined. My story idea that first year was about a dystopian world where sound was illegal. The main character gets caught up in the underground movement to overthrow the government. Action ensues.

I remember that year fondly. Writing it was fun, but the best part for me was the outlining. When I explained the bones of the world and my storyline to my beautiful wife, she caught the vision right away and helped me think through a lot of the details.

“What about cars? How do people get around without making any noise?” she would ask.

“Electric cars, Maglev trains, and very quiet shoes. Besides, people aren’t really allowed to move around outside of their cities anymore,” I would say.

“What about babies?” she would say. “Babies can’t help but make noise.”

“When a woman reaches a certain point in her pregnancy, she has to go to a sound proof birthing facility where she will stay with her child for ten years, living in relative sound freedom while the kids are taught sign language and warned of the dangers of sound. This way, the father role can be assumed completely by the government.”

“How about pets? Do people have pets?”

“Sure, but they have to get them from government-approved pet shops after their vocal cords have been removed.”

Issue after issue, we thought about how to create a silent world. And I must say that I really believe that many of our ideas would work. They would require a tyrannical government, but that was okay because my story had that too.

And then fellow Weakling, Andrew Rogers, contacted Ann Byle, a writer at the time for the Grand Rapids Press and got us a story in the newspaper (read it here). Suddenly, it was more than just a private thing my writer’s group was doing. Now it was a real thing. It was something that told the world that I was a writer, not just someone who dabbled in stringing sentences together.

And then the actual weekend came.

It was my first attempt at writing something longer than a short story. I was already more attached to my characters than I realized, because by the end of the novel when some bad things happen, I felt like a monster forcing my characters to deal with the evils I had designed for them. It was the first time that I felt bad about being mean to a fictional person.

During the weekend, the Weaklings all stayed under one roof. We woke at odd hours to start writing, we ate when someone was appointed to cook, and we shouted out word counts and save reminders often enough to spur each other on to longer and better novels.

And when it was done, we all had first drafts. They were terrible first drafts, but I remember thinking at the time that any of us could have won the contest. It wasn’t too far out there that one of us had written something amazing.

We’ve done the contest every year since.

But next year, we will all be famous published authors, and, if our book tours permit us, we will hole ourselves up again for another 3-day Novel Contest.

Check out the other Weaklings’ blogs below for their 3-day Novel Memories.

For all the times I’ve mentioned “3-day Novel” on my blog, click here.

The other day, I announced a new Flash Fiction Challenge, but I didn’t give you any examples. Consider this post the remedy for that wrong. Below you will find my 50 word character introductions to the main characters of my last three 3-Day Novel entries plus one that I will be writing soon.

If you haven’t done so already, check out the challenge and enter your own 50 word character description!

Daniel O’Ryan – Fathered by a demon, raised in an orphanage, and more powerful than he knows, Daniel O’Ryan is about to start his freshman year at a new school, the prestigious Blackwood Academy. But when his powers begin to manifest, Daniel must decide who he truly is, man, demon, or something more?

Ezra Stone – Ezra Stone blames the Union for his wife’s death in the birthing center. If only he could have been with her, he might have done something. But laws in the silent society dictated that she go alone to sound-proof facility. Soon, Ezra’s grief will make itself heard around the world.

Quentin Roosevelt – Youngest son of President Theodore Roosevelt, Quentin is eager to get into the Great War. But when his bi-plane is downed over France, Roosevelt is given the chance to fight an even greater war. Faking his death, Quentin sets out for the mysterious artifacts that grant mastery over time itself.

Connover Swofford – It seems that everything Connover Swofford wants, someone else gets. But when his depression hits a new low, and his successful co-worker commits suicide, Connover realizes that it isn’t just the good things that happen to those around him. Can he use his new-found powers to improve his own lot? 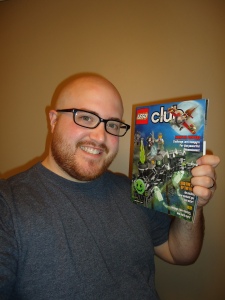 I just got my illegal edition of the Lego Club Magazine in the mail, and what do I find on the cover but a Steampunk duel between a gentleman and a vampyre atop an enchanted train! For those of you who don’t know, I am a huge Lego fan and I’ve recently taken a shine to the Steampunk scene.

I mentioned once how my Lego collection inspired one of my 3-day novel entries, and since my WIP has elements of Steampunk in it, I’m hoping for a bit of inspiration from these sets as well. Here’s the intro to one of the new characters:


You can browse the collection of sets here.

I must admit that I would rather the Steampunk elements be the focus and not the monsters, but I’ll take what I can get.

If you are at all curious about steampunk, be sure to check out the links below. I am a member at the Brass Goggles forum and have had only positive experiences with all of the gents and ladies that I meet there. Steampunk has to have the politest members of any subset of the population.

Is anyone else out there writing with elements of Steampunk? I’m just curious.